Singapore’s ambitious Gardens by the Bay project will officially open to the public on June 29, giving the city its grandest showcase yet of its commitment to eco-tourism and building a ‘garden city’. 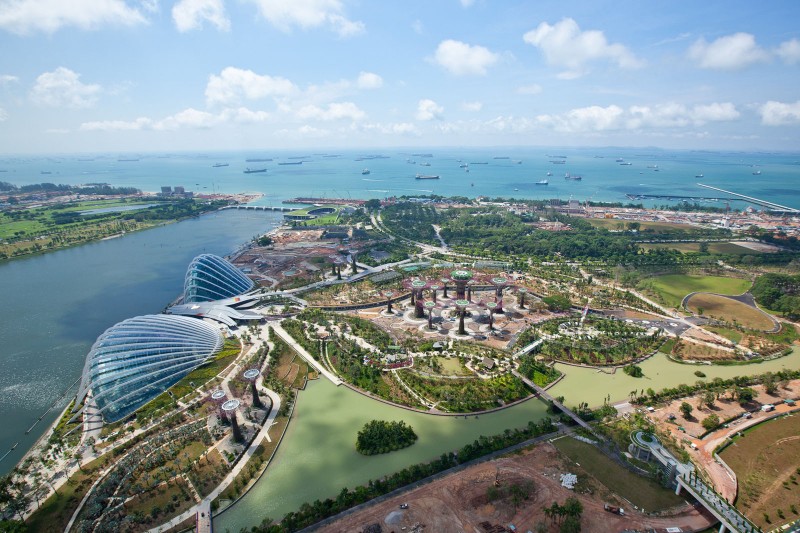 Singapore’s ambitious Gardens by the Bay project will officially open to the public on June 29, giving the city its grandest showcase yet of its commitment to eco-tourism and building a ‘garden city’.

The most prominent feature of the Gardens by the Bay is the two Conservatories. Each of these big domes, which are made of a swooping glass and steel exoskeleton structure, feature various rare plant species from the cool-dry climate of the Mediterranean and semi-arid sub-tropical regions, and the cool-moist climate of the Tropical Montane region. In keeping with the theme of environmental sustainability, the Conservatories apply energy-efficient solutions for cooling which can cut down energy consumption by at least thirty percent.

Another feature which is being heavily promoted is the collection of various ‘Supertrees’ scattered around the Gardens by the Bay. During the day, the large canopies of these supertrees will provide shade, and help moderate temperatures. At night, the canopies will liven up the gardens with special lighting and projected media. Eleven of these supertrees are embedded with solar photovoltaic technology, which helps generate electricity for the entire complex.

“The Gardens by the Bay project aims to put Singapore at the forefront of eco-tourism,” said Ms Jacqueline Low, Chief Operating Officer of Janus Corporate Solutions, a Singapore company registration agency and parent of GuideMeSingapore.com. “It shows that the government continues to work towards environmental sustainability, and follow through on its concept of making Singapore like a city within a garden.”

Gardens by the Bay is just one of Singapore’s many initiatives towards a cleaner and greener future. The city will also hold the Singapore Green One (G1) on September 2, which will be its first-ever ‘zero-waste’ event. Organizers have announced that Singapore G1 will include a walkathon, exhibitions, performances, and other activities aimed at reducing carbon footprints while increasing environmental awareness.

The Gardens by the Bay also looks to add a new dimension to the city’s surging tourism industry, which is a big part of the overall Singapore economy. Last year, the city saw a record 13.2 million visitors, and the numbers are projected to be even higher this year due to other new attractions and infrastructure such as the recently-opened Marina Bay Cruise Centre.

“Our analysis shows that Singapore is headed towards even bigger receipts from tourism this year, and we have observed that more people are now keen on setting up travel agencies and other tourism-related businesses,” said Ms Low. “Singapore’s continued efforts to innovate will help it achieve great results in tourism and commerce for years to come.”