Back to Incorporation guides

Looking to incorporate a company in Singapore

Our experts at Hawksford can help

What makes the Singapore economy tick?

The robust Singapore economy drives thousands of global professionals to its shores each year – but what makes it so attractive? Read on to find out.

A major financial hub in the Asia Pacific region, Singapore has long earned a reputation as one of the world’s most advanced economies.

Despite its small domestic market and a lack of natural resources, Singapore successfully weathered through the financial crises of 1997 and 2008. Today, the Singapore economy is one of the most stable in the world, with no foreign debt, high government revenue and a consistently positive surplus.

The Singapore economy is mainly driven by exports in electronics manufacturing and machinery, financial services, tourism, and the world’s busiest cargo seaport.


Which Singapore industries drive the economy?

Singapore’s largest industry by far is the manufacturing sector, which contributes 20%-25% of the country’s annual GDP.

Key industry clusters in Singapore’s manufacturing include electronics, chemicals, biomedical sciences, logistics and transport engineering. In the third quarter of 2017, the manufacturing sector grew by 35%, with clusters like electronics and precision engineering benefiting from high demand.

Below is a list of Singapore’s top industries according to their GDP contribution: 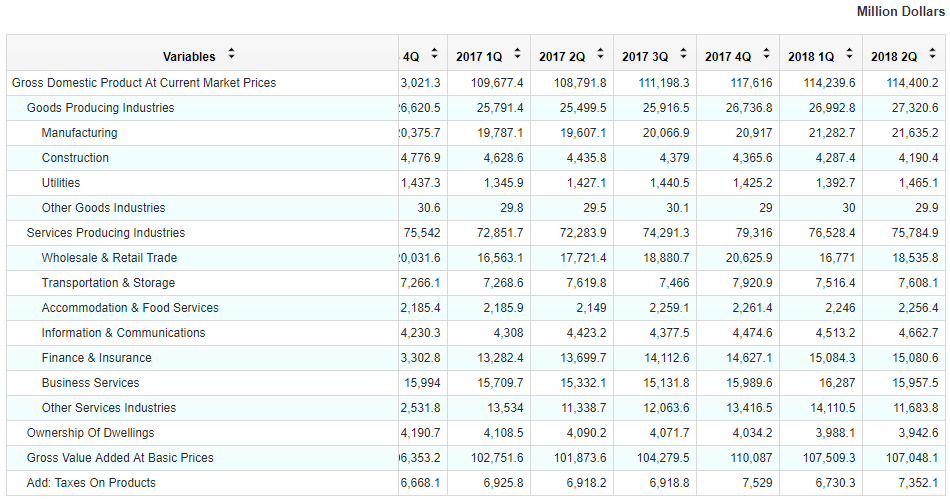 What natural resources does Singapore have?

Located at the southernmost tip of the Malaysian peninsula and with a land area smaller than that of New York’s, Singapore has no significant natural resources.

However, this did not stop Singapore from developing itself into a regional hub for oil and gas, as well as a world leader in sustainable water solutions and projects such as NEWater and the Deep Tunnel Sewerage System.

It has been said that Singapore’s true natural resource is its people – and in a growing economy, this could not be more apt. As the economy grows, both local and non-local companies have access to a pool of an educated workforce and, eventually, a burgeoning consumer market.

How developed is Singapore’s infrastructure ?

As a commercial and military seaport during the British colonial era, Singapore’s infrastructure has always been well-developed. After Singapore gained independence in 1965, the post-colonial government went on to improve and expand the country’s transport, communications, industrial, and housing systems.

By land, Singapore is served by 9,310 kilometres of paved roads, 199.6 kilometres of rail (mass rapid transit and light rail combined), as well as island-wide bus, taxi, and ride-share operations.  The transport system is efficient, safe, and punctual.

By air, Changi International Airport is connected to 380 cities in 90 countries. It handles more than 7,000 weekly flights transporting passengers and cargo worldwide. By sea, the Singapore port gives shippers a choice of over 200 shipping lines and access to some 600 ports in 123 countries. At any one time, there can be as many as 1,000 ships docked at the Singapore port, which makes it the busiest container port in the world.

The telecommunications system is no less remarkable - Singapore has one of the world’s highest mobile penetration rates at 1.5 mobile phones per person, and more than 90% of Singaporean households have Internet access. In hotspots such as coffee chains, fast-food restaurants, or Changi Airport, you can use an island-wide Wi-Fi service called Wireless@SG for free.

Industrial and commercial facilities for businesses are also readily available in Singapore. The Jurong Town Corporation (JTC) has over 47.7 million square meters of strategically-located built industrial space that can be used to build factories, warehouses and business parks. For commercial businesses, choice of world-class high-rise and low-rise offices in the Central Business District and other parts of town are available.

For the third quarter of 2017, Singapore’s GDP (at current market prices) stands at S$107 billion. The Singapore economy grew by 5.2% during this period – which is the fastest pace it has grown in more than three years, according to a Bloomberg report.

The recovery of global trade and an improving labour market has helped Singapore not only sustain growth in the manufacturing industry, but also broaden out to other industries such as services and retail.

The Monetary Authority of Singapore estimates that the Singapore economy is likely to expand at a steady, but slightly slower, pace in 2018 compared to 2017.

Does the Singapore government have any public debt?

The Singapore government has maintained zero foreign debt since 1995. As for domestic debt, the total outstanding government borrowing was S$496 billion as of the third quarter of 2017, which comprises of registered stocks and bonds, treasury bills and advance deposits.

However, this high figure is not an accurate representation of Singapore’s fiscal strength - the Singapore government borrows to invest, and the return on investment (ROI) generated on these investments makes up for the difference.

By implementing these strategic debts alongside with strong asset protection, robust economic growth, and prudent macroeconomic policies, the Singapore government has a strong balance sheet with its assets outweighing its liabilities.

What are the main sources of revenue for the Singapore government?

The Singapore government’s total revenue is estimated at S$69 billion as of the third quarter of 2017.

As with most governments, Singapore earns the bulk of its revenue from taxes – income, property, excise and customs duties, as well as GST. Other revenue sources for the government include are licence and permit fees, government property rental, fines and forfeitures, as well as capital receipts from the sale of capital goods.

What is Singapore’s current currency strength?

Here’s how the Singapore dollar has fared against major global and regional currencies (figures in SGD): What is Singapore’s current trade strength?

Singapore traded S$967.1 billion worth of goods in 2017, an increase of 11.1% from the previous year. Singapore is considered to be the world’s 14th largest exporter and 17th largest importer.

Singapore exported $$515 billion worth of goods in 2017, with its primary export partners being the United States, Australia, Japan, China and United Kingdom

It also imported S$452.1 billion worth of goods in 2017, with its primary import partners being the United States, Netherlands, China, Hong Kong and Japan.

Build your career in a secure, stable economy

The Singapore economy is on a healthy growth path – it was ranked the third wealthiest nation in the world by Fortune, and has enjoyed high rates of foreign direct investments (S$62 billion in 2017). If you’re looking for a place to set up or expand your business, Singapore is the place to be.

What makes Hawksford a trusted provider?

You may find these Singapore business guides useful in helping you make your decision:

Providing you with expert guidance & resources for starting & operating a Singapore firm in specific industries. Find out your industry information here.

Why Foreign Companies Relocate to Singapore

Registering a Singapore company? Here’s the only company registration guide you’ll ever need.

Why choose Singapore for your business?

One major advantage of relocating your business to Singapore is its convenient location. Find out more.

Looking to register a company in Singapore?

Our services get you one step ahead in Singapore.

Just a few contact details so we know who to ask for.  We try to call back within 48 hours of receiving your information.

Start an email conversation with our experts

Our experts will be in touch with you within the next 48 hours.