Singapore Continues To Be a Leading Hub for Start-ups

Singapore continued to be a hub for entrepreneurs and start-ups in Q3 2016, with the number of companies with a share capital of S$10,000 or less representing 76% of all business formations during the quarter, according to Hawksford’s Singapore New Business Trends (previously known as the Singapore Business Formations Report) for the third quarter of 2016.

The trend represents a small increase (1%) on Q2 2016, but further reinforces Singapore’s reputation as an attractive place to launch new businesses. Against an uncertain global economic backdrop, entrepreneurs continue to flock to Singapore to capitalize on the business friendly regulatory framework of the region, which allows companies to register with a share capital of as little as S$1.

The report also found that Singapore remains a popular destination for foreign enterprises to set up their regional operations and innovation centers. Despite the weak global economic recovery there were 32 Foreign Company Branch Offices registered in Singapore in Q3. The share of foreign subsidiaries and companies set up by foreigners also remained unchanged at 47% and 44% respectively. In Q3 Dentsu Aegis Network launched its Global Innovation Center, Philips launched an Application Center, CITIC launched an Innovation Center and energy giant, ENGIE, launched a green energy lab. 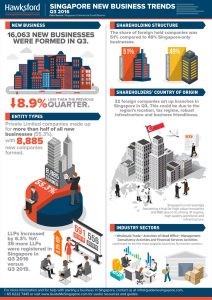 The number of Exempt and Non-Exempt Private Companies registered a year-over-year increase of 3.2% and 0.2% respectively for the third quarter. The surge in these two categories against Q3 2015 reflects the business optimism that remains unfazed amidst the lingering uncertainties of the global economy.

Jacqueline Low, COO of Hawksford Singapore, said, ‘Singapore continues to offer attractive regulatory frameworks that support the growth of new and established businesses. The upturn in foreign held companies and start ups in Q3 provides a strong endorsement for the region’s business credentials.

‘The year on year growth of the Exempt and Non Exempt Private Company categories, though just moderate, bodes well for the business sentiments despite the economic headwinds. The continued uptick in the share of foreign held companies is a strong affirmation of Singapore as a regional business hub and going by the business service sector’s measure, the business barometer is still reading healthy and we remain upbeat for the rest of the year.’