Delivering the Singapore Budget statement for 2017 on 20 February 2017, Finance Minister Mr Heng Swee Keat emphasised on developing strong capabilities and forging deep partnerships in Singapore’s economy in order to re-position itself for the future.

Singapore’s economy clocked a GDP growth rate of 2% in 2016, which Finance Minister Mr Heng Swee Keat noted was “within range, but at the lower end of our potential growth over the medium term”.

While sectors such as Electronics, Information & Communications, and Education, Health & Social Services managed to perform, others such as Marine & Offshore and Construction are facing cyclical weakness. Sectors such as retail, for instance, are experiencing structural shifts.

Over the next two to three years, the different sectors are expected to be in transition as they re-position themselves for the future. To support them through this process, the following outlines sector-specific measures for the near term. 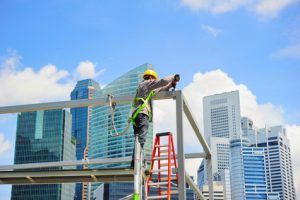 More help is on the way for the construction sector, which is facing knock-on effects from a deepening property slowdown. $700 million worth of public sector infrastructure projects will be brought forward to FY2017 and FY2018, which will enable firms to bid for and participate in these projects. Examples of projects cited included the upgrading of community clubs and sports facilities.

A new $150 million Public Sector Construction Productivity Fund will also be introduced to encourage government agencies to procure innovative construction solutions that may have higher costs but will prove productive. This aims to allow these new solutions to enter and gain traction in the market.

In line with efforts to spur productivity improvements, however, levy rates for Basic tier R2 workers in the Construction sector will be raised from the current $650 to $700 with effect from 1 July 2017.

With the Manufacturing sector surging in output with a 11.5 per cent growth year-on-year, firms are encouraged to sharpen their competitive advantage by adopting advanced manufacturing technologies.
Under a new Tech Access Initiative, A*STAR will enable companies to access advanced, specialised machine tools for prototyping and testing that may otherwise be too costly to purchase. These equipment may range from inspection tools to more advanced equipment such as robotized 3D scanners and high pressure cold sprays for additive manufacturing.

Some of the current support measures for Marine & Offshore Engineering firms include the Bridging Loan, which provides access to working capital to help them bridge short-term cash flow gaps.
To support firms through continued cyclical weakness, foreign worker levy increases for the Marine and Process sectors, which were due on 1 July 2017, will be deferred by one more year.

With some sectors facing a down cycle, the 2017 Budget proposes a targeted approach to help companies in affected sectors weather the economic uncertainties in the near term. This is balanced by enhancements made to other broad-based measures such as an increased cap for the Corporate Income Tax rebate, the continuity of the Wage Credit Scheme, Special Employment Credit and SME Working Capital Loan to help businesses cope with rising costs. In the next article, we will take a closer look at proposed measures for the medium- and long-term that are aimed at preparing local enterprises for the future.