MOM has raised the bar further for Employment Pass

On 28th July, the Ministry of Manpower (MoM) announced a revised higher salary threshold that will determine the eligibility of candidates applying for an Employment Pass (EP) in Singapore.

Accordingly, from 1 January 2017, a candidate must earn a monthly basic salary of at least S$3,600 in order to be eligible to apply for an Employment Pass (current minimum qualifying salary is S$3,300 per month). It must be noted that salaries of candidates with more years of experience must commensurate with their work experience and skill set.

The move is deemed to moderate the inflow of foreigners and as an extension of the government’s efforts to enhance productivity while promoting a stronger Singaporean core. The previous revision was made in January 2014 when the qualifying salary was raised from S$3,000 to S$3,300.

Consequently, the EP holders, whose pass expire and fall due for renewal, will also be impacted, depending on the Date of Expiry. 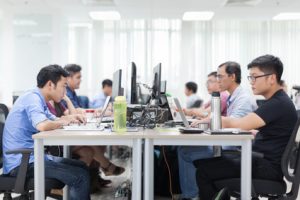 The backdrop for hiring foreign talent in Singapore is becoming more challenging. Following the rising resentment among local workforce regarding the unfair competition from foreigners, whom they claim are hired by the employers for lower salary, the government has been tightening the work pass framework for foreigners.

A company that scores well on all these factors will not have any hurdles in getting its EP applications approved. Companies that fail to score well on these factors will get blacklisted and its EP privileges curtailed until the issues highlighted are rectified.

The MOM has commented that while the revised salary criteria is meant to moderate the inflow of foreigners, is also to keep pace with the rising local wages. The median gross monthly income of full-time employed residents was S$3,949 in 2015 and has an annualized change of 5.3% in real terms. The revised difference of S$300 accounts for a 9% change over the existing minimum salary of S$3,300.

As of December 2015, the total number of EP holders accounted for 187,900 – an increase of 9,000 new pass holders from the previous year. The proportion of EP holders in Singapore’s total workforce of over 3.6 million is much less than what it is widely perceived by the general public. EP holders hold Professional, Managerial, Executive and Technical (PMET) jobs, which was the cause for the ire among the locals. However, Manpower Minister Mr. Lim Swee Say, during his speech at the Committee of Supply, in April, had highlighted that the local PMET employment now accounts for 54% of total local employment. So effectively, the number of foreigners holding on to PMET position is considerably less.

The redundancy among the local PMET is relatively higher than among non-PMET workers. Generally, amidst the economic slowdown and the ongoing restructuring, mid-career or mature PMET workers take longer time to find a job when they are laid-off which is not peculiar to Singapore job market. Even PMET EP holders will have a tough time looking for jobs if they are axed. The extended period of unemployment between jobs, has apparently distorted the perception from reality regarding the foreigners holding PMET jobs. In reality, Singaporean workforce holds more than 75% of the PMET jobs.

Commenting on the revised higher salary criteria for EP applications, Ms. Jacqueline Low, COO of Hawksford Singapore says, “The revision was anticipated, and is typical for the ministry to review salary criteria annually and calibrate it with the local wages. This is not only to ensure a level playing ground for the locals and foreigners in the job market, but also to ensure that the foreigners, looking for jobs in Singapore, have a fair idea of the current labor market and living costs in Singapore. This will help in attracting good quality foreign workers who add to the vibrancy of Singapore’s workforce. Increasingly the government is pushing enterprises towards productivity and the recent introduction of ‘organizational factors’ in EP framework is a drive to eliminate unfair practices of errant employers.”