Hawksford Singapore has been publishing the quarterly report, which contains statistics and analysis of business formation activity in Singapore, since 2010. ‘We have seen some interesting trends emerge in Q4 of 2014, and indeed throughout the whole of 2014. What is most pleasing to see is the level of business formation activity, despite what are challenging economic circumstances. It looks as though initiatives, such as the share capital clause of the Singapore Company Act, are also stimulating further growth. I look forward to reviewing our Q1 2015 report, when the data comes in, to see if these positive trends continue.’ 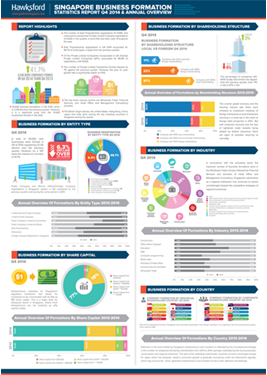 The most recent report, which publishes this week, shows that although the total number of business formations is lower than the preceding quarter, it is in line with the trend observed in previous business years. But when compared to the average of previous years, the total number of new businesses formed has far exceeded the trend. The average for the last quarter usually hovers below 15,000, but Q4 of 2014 set a new record with a total of 20,540 new business registrations.

The business registration activity for the whole of 2014 was phenomenally high. The year also witnessed a change in trend with Sole Proprietorship registration gaining momentum. For the whole of 2014, a total of 32,923 Sole Proprietorships were formed, of which, 9,585 were registered in Q4 alone. The change in trend was mainly prompted by the implementation of small business specific schemes, which were announced in the 2014 Budget. Driven by the potential to qualify for the benefits, many small businesses were registered in order to gain a legal identity.

A total of 38,178 Private Limited Companies were incorporated during 2014, of which 9,326 were incorporated in Q4. The category, which has conventionally dominated the business formation scene, has receded to second spot since the third quarter.

Interestingly, a total of 176 Branch Offices were setup in Singapore during 2014, as against 98 in the previous year. This reflects the unwavering preference for Singapore as a location for business expansion efforts and the growing confidence in Singapore as a regional hub. In Q4 alone 46 Branch Offices were set up, a strong endorsement of Singapore’s resilience despite the challenging economic conditions that have prevailed during the quarter.

Entrepreneurs continue to take advantage of the favourable share capital clause of the Singapore Company Act, which allows for businesses to be formed with share capital as low as S$1. As a result, in this quarter, 77% of businesses were formed with a share capital of S$10,000 or less. Interestingly, the percentage of companies incorporated with S$500,000 or more share capital has marginally increased to 2.05% in 2014 from 1.75% in 2013.

Singapore continued to attract enterprise and individual investors from diverse geographic origins. The share of foreign individual shareholders increased to 25% in the Q4 from 23% in the previous quarter, with Chinese entrepreneurs accounting for the second largest share. 52% of the subsidiaries formed in Q4 boasted corporate shareholders from foreign countries.

In line with convention, the Wholesale Trade sector had the maximum number of business formations followed by Head Office & Management Activities and the Financial Services Sector (excluding Insurance & Pension Funds). In spite of the challenges posed by economic restructuring, aided by strong domestic consumption the Retail Sector and F&B sector held on to their share as in the preceding quarter. There was, however, a significant dip in the share of Financial Services sector in the year, possibly attributable to the uncertainties that plagued the market due to the looming interest rate hikes and the consequent flight of funds that was anticipated.