Singapore’s transport infrastructure is set to undergo changes in the coming years as the government looks to follow through on its action plans addressing the city’s booming population. 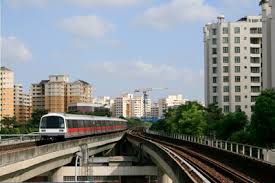 Despite the otherwise excellent public transport system, there has been growing frustration from commuters over the last two years due to a series of train breakdowns. More recently, a cable caught fire in the tunnel of the Newton MRT station, causing a disruption to morning commutes along the North East Line. There is also the issue of overcrowding on buses and trains. With the population rising but no significant measures implemented to address the increased commuter load, waiting time has doubled or tripled for many people during peak hours.

To ensure that the situation does not get worse, the government is looking at various ways to relieve the congestion. The additions to the MRT network are the best way to do it, but these will not be operational until at least five years down the road. For the meantime, short-term fixes that have been implemented include bus enhancement initiatives that seek to increase buses and lessen waiting times by arriving at more consistent intervals.

This week, Singapore’s Transport Minister Lui Tuck Yew also announced plans to expand its Bus Service Enhancement Program. The initiative, which was first introduced in September 2012, will add an estimated 550 additional buses to routes with heavy ridership to make commuting faster and easier for Singaporeans during peak hours. The government is now looking to take the program further by adding morning-peak express routes and feeder services into MRT stations.

Another notable development is that Singapore’s MRT network will get even bigger over the next decade. It was announced in January that the city will be opening two new MRT lines, while three existing lines will be extended. The expansion will double the rail network stretch to 360 kilometers, from the present 178 kilometers. This ambitious expansion of the current rail system will have a huge impact on commuters in Singapore. Once it is fully completed in 2030, an estimated 8 out of 10 households will have a train station within a 10-minute walk, compared with the current ratio of about 6 in 10.

The latest round of improvements on Singapore’s public bus and train systems are a timely move by the government. Even with a fast growing population due to Singapore’s attractiveness as a great place to visit, relocate, or incorporate business, residents will likely be able to enjoy quick and convenient rapid-transit options to just about any major point on the island. This means less money spent on purchasing their own private vehicles, and also means faster travel without congesting Singapore roads.

Bus and rail fares are relatively cheap when compared to other countries, and cost anything between S$0.70 to S$2.50 per trip. It is not far-fetched at all for an individual to live and work in Singapore for a whole year without ever sitting in a taxicab or private vehicle.

The government has also introduced a program that tries to lessen morning traffic on the MRT by giving discounts to early-bird commuters who are able to complete their morning journey by 7:45pm. The program has already seen some modest success, with a reported 3-4 percent of commuters changing their travel times to avail of the discount.

Traveling within Singapore is not the only aspect that will be improved this year. The record travel numbers are also a reflection of the booming tourism industry in Singapore. Flying in and out of the city will become even easier, thanks to the construction of the new Terminal 4 at Changi International Airport. The new building, which is the centerpiece of a S$1.3 billion investment by Changi Airport Group, will be built on the old Budget Terminal site. Projected to be fully operational by 2017, it is expected to boost Changi’s annual passenger capacity to almost 85 million passengers from the current 73 million.